A GIFT FROM THE NATURE 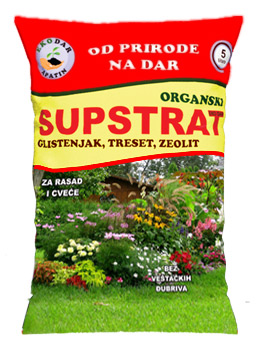 SUBSTRATE EKO DAR is a high-quality organic fertilizer and represents the mixture of humus (product of processing manure and organic waste carried out by the  Californian red earthworm), peat and zeolite, has dark color and odorless.
The substrate is composed of the organic compounds and a bacterias that help further decomposition of the surrounding soil. Earthworm humus does not contain any chemical additives, pathogenic germs and toxic elements.
As such, it is ideal for usage in fruit growing, vegetable crops, horticulture, herbs and forestry.

Several times more efficient than the most complex known chemical and natural fertilizers.
Purpose: In the sowing, transplanting of plants, for seedling production and cultivation of vegetables, fruits, flowers, herbs and other horticultural plants.
Usage: Filling the substrate in the appropriate containers (cruse, flower pots, etc.).
There are no limitations in the application or any negative effects due to overdosing.

THROUGH USAGE OF THE SUBSTRATE, BASED ON EARTHWORM HUMUS ENHANCED WITH ZEOLITE AND PEAT THE FOLLOWING IS ACHIEVED:

Unlike other available substrates in the domestic market (produced by the domestic and foreign producers) which represents a combination of several types of peat (mostly light and dark peat) SUBSTRATE ECO DAR is an unique product, created according to a unique recipe because the basis of this preparation is HUMUS EKO DAR, produced on our own farm of Californian earthworms, enriched with peat and zeolite that enhances the beneficial effect on the growth, development and protection of plants.

SCIENTIFIC FACTS ABOUT THE ELEMENTS OF THE SUBSTRATE EKO DAR:

Lumbrihumus (earthworm humus) is the best natural ecological highly valuable organic fertilizer, obtained from organic waste which is processed by red Californian earthworms - ideal for use in the greenhouse, vegetable, floriculture and fruit production.
Plants treated with earthworm humus, contain up to seven times more vitamin C than those who were treated with artificial fertilizers. Also, plants that are treated with humus are much faster and better developing, more healthy and more resistant to drought, their leaves are larger than those treated with artificial fertilizers, flowers and fruits are significantly bigger, plants mature faster and require far less chemical protection, plant height is larger by 20-30% and the content of ascorbic acid in fruits significantly increases if the plants are treated with earthworm humus.

Humus earthworm is extremely rich in organic units necessary for the growth and development of all plant species such as nitrogen, phosphorus and potassium as well as with trace elements such as magnesium, selenium, zinc, boron, iron, calcium and sulfur that act as biocatalysts facilitating the utilization of nutrients in all conditions.

A similar case is with oxygen, which uses crumbly structure to penetrate to the roots, and he represents one of the essential factors for the quality development of the root system.
Earthworm humus also binds harmful substances for itself if they are present in preexisting soil or if they occur later. Crumbly structure allows him to bind to itself the harmful substances such as heavy metals, turning them into insoluble form, where it will be less released into the soil, reducing their harmful concentration.

With all his properties humus improves soil quality making it suitable for planting all species. The dark color of humus, illuminated by sunlight in spring contributes to faster warming of the soil and thus stimulates the germination of seeds, as well as faster development of plants due to the acceleration of all biochemical processes.

Peat represents a natural creation that occurs when organic material of plant origin accumulates in conditions of high humidity. Peat is considered as a layer thicker than 30 cm, whose content is the specific form of peaty humus.
Bright peat acts as a natural sponge (retains water 300 times more than its volume), composed of sfagnums or reed. It has an important role in the ventilation of the substrate because there has no ability for decomposition and is completely insensitive to diseases and well tolerated by all plants. It is used in proportion of 25-35% in different substrates, if used in the mixture for seeding or transplantation can be added by 50%.

Peat consists of more or less decomposed moss from the genus SFAGUM (Sphagnum). Most commonly used for improving water-air regime in heavy and congested, and it is particularly suitable in an extremely cold soils. Adding peat to soil accelerates the development of root systems, allowing the better nutrition of plants. In addition, peat contains a complex of matter that with its effect on plant organism activates the life processes. It is used in pure form or as a mixture with garden soil and sand. It is rich with minerals needed for plant growth. Has a weakly acid reaction (pH value ranges from 6.5 to 7.5) and is suitable for the cultivation of most plants which corresponds to the neutral up to weakly acidic soil.

Thanks to its physical properties to absorb water and gradually release water together with nutrients, peat improves air regime of the soil, pore volume and looseness of substrate. The results are reflected in higher germination, faster grow of the plant, better and healthier ripening of the fruit and reduced use of pesticides. Peat is added to humus and compost in amount of 25-30% when preparing the substrate. It also contains the necessary elements for the development of plants: magnesium, potassium and calcium.

This mineral is a natural product created by the chemical reaction of lava and seawater. Mineral zeolite can not be found at all places on the planet, but only there where in given moment existed the ideal conditions for the implementation of this type of reaction. So, characteristic reaction of hot volcanic minerals and salt from the sea, is responsible for the development of minerals with amazing characteristics.
What is it that makes the zeolite so unique?

This mineral has a very interesting structure and its appearance under a microscope resembles a cage. Zeolite is one of the rare minerals in nature with negative charge. In contact with positively charged toxic substances behaves like a magnet that draws them, and then as a sponge that absorbs them into its lattice structure.

As described zeolite has a specific ability to suck toxic substances from various substrates (soil, water, plant, animal and human organism) in his three-dimensional crystal structure consisted of interconnected voids. Under toxic elements are considered those from the most innocuous ones up to those most dangerous, such as heavy metals (mercury, lead, arsenic ...) and radioactive particles.

The application of zeolites in agriculture:

Since it has the capacity to purify soil, zeolite is increasingly being used in agriculture, especially in the production of organic food. Land enriched with zeolite, besides being relieved of toxins, becomes loose, rich with minerals and longer retains moisture in it. In this way the plant is more advanced and provides a healthier yield.
Zeolite is also used as a means to purify water.
This mineral is of great importance in the decontamination of radioactive areas because, like a sponge absorbs radiation if spread out over the contaminated soil.
Zeolite, thanks to its specific structure, the degree of purity and established connection with macro and micro elements creates optimal physico-chemical conditions for the development of perennial plants.
This product allows maintain of optimal diet regime, moisture in the soil as well as the regulation of physical and mechanical properties of the soil in the pits for planting young plants.
During planting of fruit and grape reception of coils increases, as well as the growth and development of roots and shoots. Contributes to shortening of the interval from planting to obtaining yields. During the period of full fertility, increases the yield and quality of fruit and vines without influence to the disruption of relations of content, total acids and nutritional elements.
The application of this product is particularly justified on soils of lighter mechanic content (sandy soils) where the degree of retention of moisture and nutrients low.

Melioration effect of zeolite on the soil is multifaceted: